You are here: Home › Small Animals › Chinchillas › The Pet Chinchilla – 12 things you may like to know…

Chinchillas are becoming increasingly popular as pets. So here are some interesting facts to introduce our fluffy little friends.

The term ‘Chinchilla’, means ‘Little Chinta’, and the name has been derived from a South American Indian tribe. Chinchillas are native to the Andes Mountains in South America and they are a similar size to a squirrel. There are two species; Chinchilla lanigera and Chinchilla Brevicaudata. Of the two, Chinchilla Lanigera is the one that is mostly found as a pet.

Chinchillas are nocturnal, sleeping during the day and active during the night. A Chinchilla can grow up to 5 to 6 inches in height and 10 to 14 inches in length. The males are slightly smaller than the females as they weigh up to 500 grams and the females 600 grams…….. 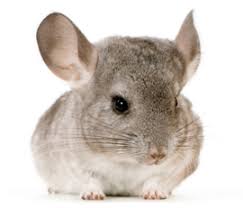 1. Chinchilla fur is believed to be the softest in the animal world. Thirty times softer than human hair.

2. A Chinchilla has more than 20,000 hairs per square centimetre. The density is so high that fleas cannot live on their skin as they would suffocate.

3. Each Chinchilla follicle can have up to 50 hairs growing from it.

4. Chinchillas have a need to take regular baths in dust or volcanic ash in order to remove oil and moisture that gets stuck in their thick fur.

6. The average age of a Chinchilla is 10 years yet some have been known to live up to 20……

7. At birth a Chinchilla weighs on average 35 grams.

8. Chinchillas can jump 5 feet above their heads.

11. Chinchillas can release their hair when frightened. This is to get away from the grip of predators.

12. Chinchillas can also spray their urine at predators as a means of self defence.

Have you ever thought of pet fostering?
Rabbit Welfare Association & Fund